The wording of the title of this post should tell you I didn’t write it – and a few astute followers of this blog will guess that my friend Lucy Brazier did.

And you’d be right.

It’s been a little while since Lucy and I shared a pint at a haunted English pub. (They’re all haunted, I think, from the tour Lucy took me on. We shared  more than one pint, too…)

But I got to experience Cambridge, Lucy’s stomping ground at the time, and the setting for the amazing stories in her PorterGirl books. 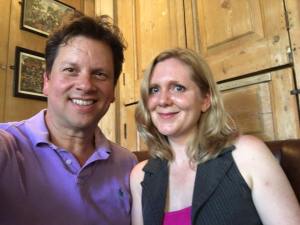 And it seems our friend from across the pond is about to release another Porter Girl novel! I have read and reviewed several of them here on the blog, and each is a fun read. I expect the new one will be no different.

I’ll ask if she has time to do an interview about this latest, greatest tome, and maybe our schedules will match up and we’ll have a chat we can video and share with you, but for now, check this out.

LUCY: “I thought I would pop you my press release for the new book!”

Here is the stuff you need to know.

Footsteps of the Templar (available to pre-order, releases 19th October 2019)

There’s an official party, with swag, too! 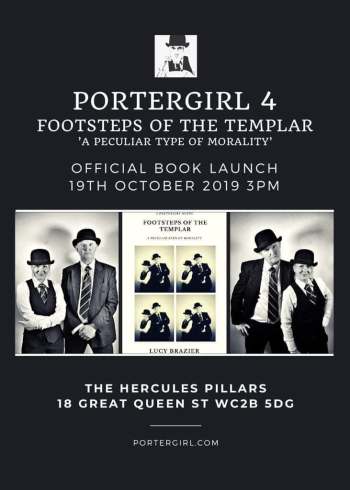 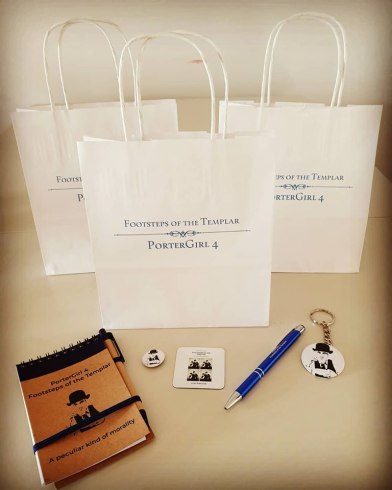 Head Porter’s hopes for a quiet life are dashed not only by the return to Old College of one of academia’s most controversial Fellows, but also the revelation that the Knights Templar may once have left behind something quite important in the College grounds. As Deputy Head Porter and The Dean mount a typically ill-considered investigation, knowledge of this esoteric legend has already fallen into dangerous hands…

Abandoning Head Porter to deal with a College wedding, a mysterious big hole, troublesome felines and a potentially murderous Bursar, Deputy Head Porter leads The Dean and the highly unpredictable Professor Horatio Fox in a race against time to solve puzzles, crack codes and follow a trail that takes them to the very heart of the legend of the Knights Templar – an ancient chateau in Chinon, France.

Coincidentally, this is exactly where DCI Thompson chooses to spend his summer holiday and if he is hoping for an escape from the rigours of fighting crime, he is to be sorely disappointed. in fact, he could be the only one standing between our heroes and the enigmatic, unseen pursuer who appears intent on stopping them in their tracks once and for all…

Looks good to me! It has the same flavor of the prior books in the series, and if you haven’t read them, you should. I mean, I did. I like lighthearted comedy attached to a mystery, and PorterGirl always delivers. It’s a fun mix of humor and real people and places – real history, done Lucy style. 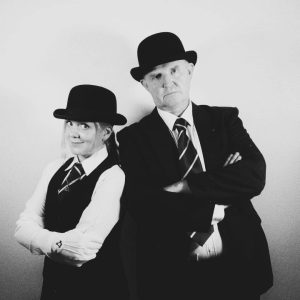 A Little About Lucy:

Lucy Brazier, author of the perceptive political whodunnit Who Shot Tony Blair? and Finnegans What?, an idiots guide to James Joyce’s notorious literary tome, is proud to announce the release of this latest PorterGirl novel, the fourth in the academic satirical series. At first glance, it is a light-hearted romp featuring the now iconic characters of Old College, but closer inspection reveals hidden knowledge and a subtle subtext recognisable only to the most perceptive of readers.

Lucy Brazier is known for her easy-going, tongue-in-cheek writing style, but this latest novel also benefits from a strong foundation of research which links ancient myths and legends with real life, modern-day people and locations. To coincide with the release, a themed event at Masonic venue The Hercules Pillars, Covent Garden adjacent to Freemasons Hall the spectacular home of Freemasonry, will be hosted by the author and her eclectic team.

“Every book I write is important to me, but there is something just that little bit special about this one. The subject matter has allowed for a depth of mystery that goes beyond anything I have written before. It has been an enlightening experience, in so many ways.” – Lucy Brazier, author.

Lucy Brazier was inspired to write the PorterGirl series after her stint as the first female Deputy Head Porter at a prestigious Cambridge college. The role itself did not end well, but the literary potential made it all worthwhile.

How The Facts Meet The Fiction:

Becoming the first female Deputy Head Porter at a prestigious Cambridge College was both the best and worst decision Lucy Brazier ever made. Leaving behind a successful career in the police, she was persuaded to opt for a change of pace and direction by joining one of the most ancient and famous academic institutions in the world.

She wasn’t ready for the bizarre and often pointless customs and functions of the academic elite, and they certainly were not prepared for having a woman among their ranks in what has traditionally been a male role. Difficulties in finding uniform and toilet facilities – among other things – were both frustrating and amusing to a woman who left school at sixteen with little to show for it.

Whilst making many friends and having some unusual adventures, Brazier was unable to win over the Head Porter. His subterfuge in trying to undermine and sabotage her role eventually got the better of her and she hung up her bowler hat for good after a year. But she had accumulated enough material to begin what would become a series of books – the PorterGirl series – and she hasn’t looked back since.

Beginning as an anonymous blog, her almost unbelievable accounts of College life, coupled with her wry wit, soon gained an eager following and her first novel – First Lady of the Keys – was published in 2016. These were followed by The Vanishing Lord, Sinister Dexter and a deluxe collection of the first three novels, plus behind-the-scenes and bonus material, Old College Diaries.

Now awaiting the release of fourth novel – Footsteps of the Templar – Brazier considers this to be her best yet. Until the next one.

If you read this far, you deserve a treat.

Lucy has been a friend of the blog for LOTS of posts, from writing tips, to interviews, so type “Lucy” in the search bar and read some of the dozen or so interactions we’ve had.

I did a review of Sinister Dexter (HERE) where I show at length some of the plot devices Lucy utilizes that make her writing so intriguing.

Great at suspense in storytelling – the list goes on and on!

So, drop a few buck (or pounds, if you’re across the pond) and order up a serving of fun and mystery form Old College. You’ll be glad you did!

Footsteps of the Templar

13 thoughts on “A Peculiar Type of Morality”