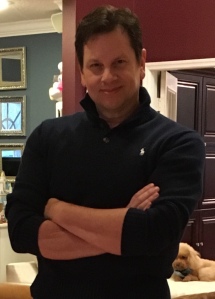 Yep, you read that right.

Do No Harm, a medical thriller box set, debuted at #55 on the USA Today bestseller list this week.

Now that I have achieved USA Today Bestselling Author status, how do I feel about it? And how much work was involved?

And it was a lot of work. 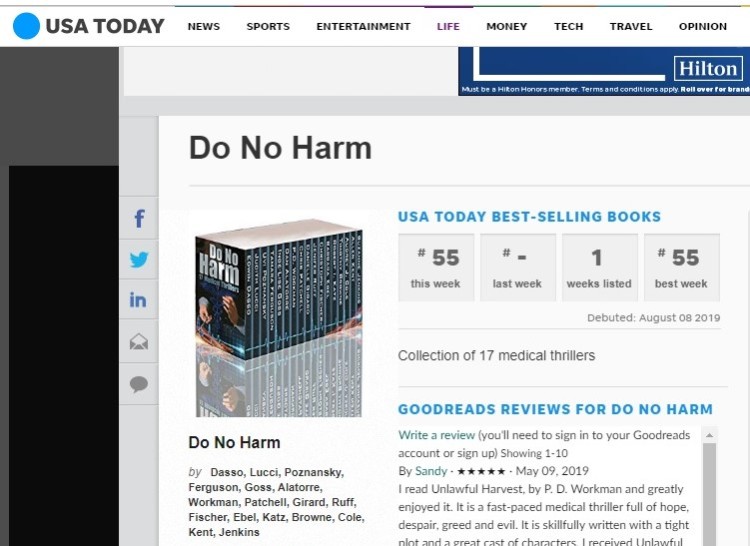 Get Do No Harm HERE.

1. First of all, writing a book at all is hard. 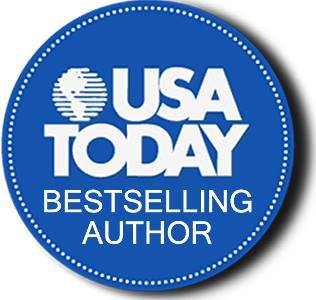 So you can see that writing a book it is difficult at all, much less doing a really good one in a really limited period of time. I documented that in an earlier post HERE, but in a nutshell, I got up really early and I work really late – but before I started, I laid out an outline and I bounced ideas off some trusted friends who I knew would steer me in the right direction. I knew when I was done writing, I’d get help from beta readers and critique partners, editors… So if you don’t have the support of that kind of team, it probably won’t happen. (Hold that thought for later.)

So just completing a book is obviously an accomplishment, but as an author I know lots of people who complete books. That’s not that big of a deal to us.

(Most authors suck at marketing, including most of the ones that I’m friends with.)

A while back I got invited to be in a group of New York Times best-selling authors and USA today bestselling authors who were going to put together a box set. That box set group had some dysfunction, and even though we sold quite a few copies of our book, it didn’t really have the success we all dreamed it would.

So I was a bit hesitant to try again.

After all, the stuff doesn’t happen for FREE.

Every contributing author has to pony up a big chunk of money because we’re going to be buying lots of ads,

but the idea is if you have 17 people in the same boat all rowing in the same direction, you are much more likely to get where you want to go. Not only that, but what one person lacks as far as skills, another person might have. This was crucial. We would have a set manager, but each of us was going to have to row our own oar as well as believe in the set leadership AND in each other – but also be ready to go above and beyond when we saw we had a strength that someone else didn’t have, and ask them if they might have a strength I didn’t have… When you multiply that by 17 people, you’re gonna have a lot of strengths. 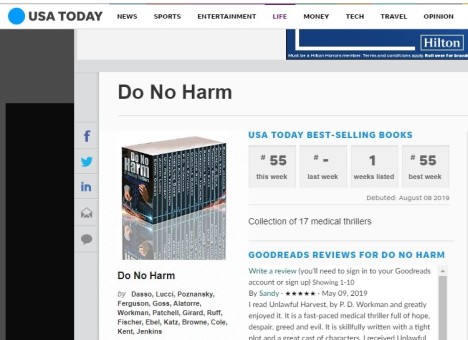 But let’s face it. I became a USA Today bestselling author as part of a box set with 16 other people.

How much of the achievement is mine?

I was faced with a very similar question when I was a child.

I was always a swimmer. From the time I was 4 or 5, all the way through high school, I was on the swim team. In summer I swam for the country club team, and in winter I swam for the YMCA team. Swimming was as natural to me as walking. I wasn’t the best swimmer – my sister was; she was bound for the Olympics – but not me. I was a natural swimmer and I was very good at it, but I wasn’t great at it.

But at my YMCA – Hamilton West YMCA in Hamilton, Ohio – stands a childhood record for a relay I was on that got first place. That record stood for decades. I was very proud that I contributed to a relay that, more than 20 years later, was still standing. It may still be standing; there’s no way to know – they remodeled and took the record boards down. No one knows where the boards are now, but 20+ years later, who cares?

When the Olympic track and field team takes the field, they have a relay race.

If one member of the relay team trips and falls, that relay team is not going to win the gold level.

Each member must give their very best effort or they are not going to win that day.

Four years later, another team will be awarded a gold medal for the same event. That doesn’t mean four years earlier the winning team didn’t win.

Of the four people on my swim team’s medley relay that won our medal, I was not the best swimmer. Two guys on that relay team could have done any part of the relay and probably gotten a better time than what I was able to do. But the simple fact is, that relay required four different swimmers, and even if they were 10 times better than me, there was only one of each of them. They had to do their part, but they couldn’t do all four parts. Without me, they don’t get that record.

Was I the best one on the team? I wasn’t even the best swimmer on that relay. But we had to have four, and I did my job. We won that day, and decades later no one else had topped the group we put on the starting blocks that day.

And that’s the case here. Who can say if I didn’t contribute my book and my marketing and my efforts and my pushing other people – who can say how well the box set would have done? After all, my prior box set did not achieve the results this one achieved.

When the New England Patriots win the Super Bowl, every member of the team gets a Super Bowl ring because every member of the team contributed to the win. The backup kicker who never saw the field was there in case the main kicker couldn’t do his job but also to push the main kicker to be the best he could be – because if he slipped up an inch he would be replaced. The mindset of TEAM.

If you proscribe to that mindset, you might win a few Super Bowls.

I never felt comfortable for one minute during the Do No Harm box set that I could do anything less than 100% for fear that I would bring the entire relay down just like an Olympian who tripped during the track and field relay or a member of my record-setting swim team relay group. Everybody had to give their best.

Today and always I will be proud of making the USA Today bestseller list.

And my next goal will be to win the title in a solo effort.

But… will I really do it solo?

A lot of people along the way would help me formulate my outline, assist me in streamlining my writing, beta read to catch errors, edit for pace… reviewers will help me gain recognition and marketers will advertise for me. I don’t pretend to do any of those things all by myself. I’ve lost valuable teammates, too. It hurts when they go, but I have to mourn the loss and then move on because I have a goal.

I can’t quit because of difficult circumstances.

There are always difficult circumstances.

I rally with whoever’s left and that’s my team now – and we move forward.

Editors. Beta readers. Marketers. Isn’t that part of my team? So I’ve never really published a book all by myself. I’ve always had someone else on my team helping.

Today, my team won a medal.

My detractors will say (and have said) it doesn’t count. For them, it doesn’t – but are they helping me achieve it solo, or are they talking down a risk and effort I was willing to take that they weren’t? Are they helping me achieve my future goals or are they hindering me from achieving my future goals? No one can know for sure, but the goals will be pursued anyway. I wish them well as I move forward – sincerely, I do – but I also notice that

Meanwhile, remember: the guy who runs the hundred yard dash and wins a “solo” gold-medal – he still had a coach. That’s part of his team. You soloists have editors and marketers and critique partners telling you what to fix. Pretend it’s a solo effort because one name appears on the cover of the book. We all know it isn’t.

This wasn’t a solo gold-medal.

This was a relay race medal.

Which means as a member of the relay team, I won.

And if you look to trash talk the accomplishment, as some will and some have, then I say this: this Olympics allows solo efforts AND team efforts on the field at the same time.

Today, my team won a medal.

Tonight, I celebrate what we have accomplished.

Tomorrow, I set my sights on the next higher goal. 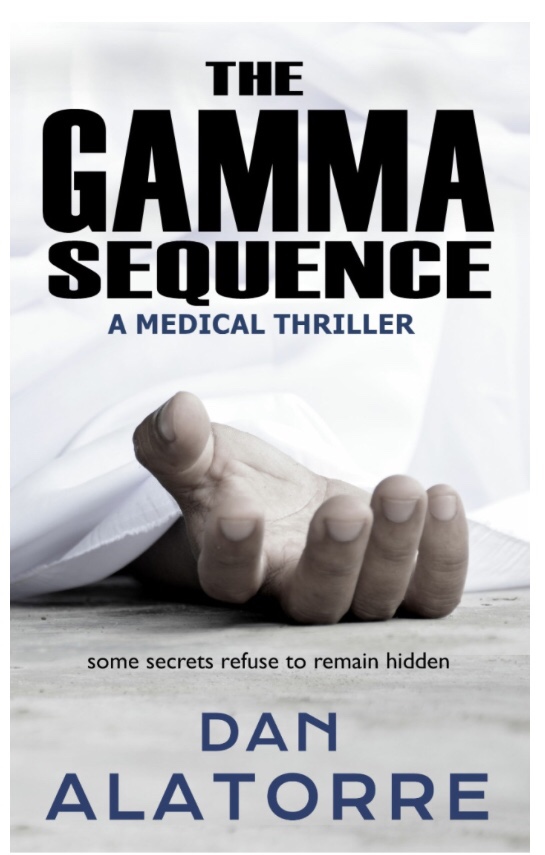 Get this amazing novel and a bunch of other ones in the Do No Harm box set.

And if you already purchased it, please go leave a review!