Until you see how good it makes your story, and then

But if you do something enough times, it can become a habit, and that means if you torture yourself with enough revisions, you will eventually incorporate that stuff into your first draft. Or more of it, anyway, and that’s totally worth the lesson you’re about to get today.

I read the following scene in a manuscript I edited a while back.

(The names have been changed.) It’s a great story, and this is a really good scene, but you can see the places where it’s just kinda missing something.

It felt rushed, because it probably was rushed – in a good way.

The author was probably excited about the scene and was moving quick.

The reader will be moving quick, too – but only if we slow down and revise the scene so the page has everything that was in the writer’s head.

Get it out of your head and into the computer or onto paper, whichever. Capture the idea for your brilliant scene somewhere. On your voicemail if necessary.

But while revising, there are a few things you’ll need to address.

George rushed towards them pushing John’s hands away from the ropes. With one swift move, John kicked George with his foot and he fell over hitting his head against the wall.

The smack of her grandfather’s head hitting the wall reverberated through Lori’s head. Her heart sank as she swallowed a scream. She tugged on the ropes with all her might needing to get to George, but it was no use.

“You moron!” Robert rushed to George’s side.

Intense anger filled Lori watching him lift George’s head, feel for a pulse, and examine his eyes. “He’s going to be out for a couple of hours and who knows whether or not he’ll be in any condition for writing.”

With one swift move, John kicked George with his foot and…

Cut “with his foot.” Kicks are with feet. Always.

You could show John raising a foot up and landing it in George’s knee or belly or whatever.

…and he fell over hitting his head against the wall.

New sentence, and be descriptive:

George crashed into the stone wall and slid to the floor in a heap.

Which is better? (USING ACTIONEY VERBS, #3 below)

“You moron!” Robert rushed to George’s side.

This reads like Robert is calling George a moron. He’s saying that to John.

Robert glared at John. “You moron!” He rushed to George’s side. (ORIENTATION, #2 below)

Think about all the steps involved in the scene in your head, and after you write a scene,

let it rest and then attack it again.

Usually it’s adding a few lines here and there, or a few words, that make all the difference.

2. Have I oriented the reader?

Too many he’s and we’re lost. Gotta use a name here and there, and occasionally a detail about the room, even in an action scene. But not too much

3. Have I added dramatic action verbs in my action scene?

Action = go big with action-ey verbs. Run or sprint? Threw or heaved? You get the idea.

4. Have I added enough emotion?

Stuff doesn’t happen in a vacuum, even in an action scene. If Lori is seeing her grandfather attacked, she will have a visible emotional reaction to it. Write that.

Grit her teeth. Clench her fists. Add that stuff.

– with some resting in between – but it’ll make the scene comes alive. You want that.

It’s simple, but it requires patience and time. 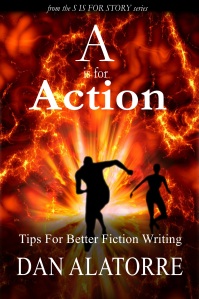 I wrote a whole book about this stuff called A Is For Action. Oh, he’s trying to sell me something! Yeah, it’s a whole dollar, for Pete’s sake.

Buy it and get the rest of the amazingly helpful information you need to know.

Oh, and leave a nice review on Amazon, too. I’ll appreciate it.

11 thoughts on “Revising and Layering: The (Often Very Tedious) Stuff That Makes Your Story COME ALIVE”