What goes on inside the writerly mind?

Let’s sit down with the second of our two Word Weaver Writing Contest 3rd place winners, Heather Kindt, and find out.

Heather Kindt grew up in Derry, New Hampshire, but now resides in the mountains of Colorado with her husband and two children. She loves writing YA fantasy and humorous fiction.

A terrific story she called “Ruby Slips and Poker Chips” won our July 2017 Word Weaver Writing Contest; she went on to publish the entire novel under the same name shortly thereafter.

DAN: Did you write your latest story, Dreamers, for the contest or was it part of a larger piece or something you had written before?

HEATHER KINDT: I began Dreamers about seven years ago. In the file on my computer, I only had a page and a half done. When Dan announced that the contest could involve suspense, I brushed off the old file and finished the first chapter of something that I hope someday can become a book.

It reads like an opening chapter of a book to me – I think I even asked if it was one.

Tell us about your writing process. What is the journey from idea to published piece /completed story?

When I won my first Word Weaver contest in July, I answered this question and probably had a similar response. With Ruby Slips and Poker Chips and The Weaver Trilogy I didn’t really plan out the writing beforehand. I’m a teacher so don’t tell my students I just said that. Now that I’m writing a little bit each day, I’m trying to be more intentional in my writing. The Ender, which I’m writing right now, contains complicated plot points so I need to know where they are going. I still try to let my characters drive the story at times, but I have to be in control of where it is ultimately going.

Where do you do your writing?

In my office, in my bed, in the giant beanbag and sometimes standing up because it’s not good to sit a lot and I’m on a health kick.

Do you have a writing goal you want to achieve? 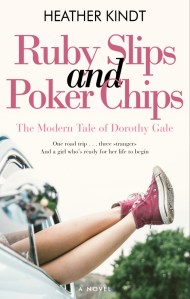 I’m glad you asked. My current goals are to continue to promote Ruby Slips and Poker Chips, which is doing very well in its reviews on Amazon. I also want to finish The Ender by June or July so I can publish my YA trilogy.

What helps you the most when it comes to writing?

Encouragement. I receive encouragement from my husband who has had my back since the beginning. Dan has been my newest cheerleader, but he also provides honest critique, which moves my writing forward. My fans also give me encouragement. Words in reviews that have meant a lot to me are “Amazing read. Light, witty with real life thrown in the mix. Worth more than five stars” and “Keep writing Heather Kindt and I will keep reading.” These words keep me typing every day. Thank you to those of you who have left reviews. They mean a lot to authors.

Success to me is having people read my books and gaining some sense of joy from them. I think it’s true for most authors that they write because it is something within them that they want to share with the world. This is true with most artists. I feel alive when I’m writing and if I could make it a career, that would feel like a success to me.

What “person” do you like to write in? First Person, Third Person, etc. – and why?

Both Dreamers and Ruby Slips are written in the first person. I love the reader being able to go along on the journey with the main character. It’s my favorite way to write because I become that character as the writer even if they’re nothing like me. My first draft of The Weaver was written in the first person. I decided to rewrite it in the third person because I wanted the reader to see in the heads of other characters. In the first book, you hear from Laney and Jason. The Watcher and The Ender are told from Laney’s, Jonas’s, and William’s perspectives. I decided to do that because the first book starts off in reality and it takes awhile for Laney and the reader to discover she’s living in a fantasy world.

Tell us about yourself. Who IS the real Heather Kindt? And not typical the boring bio stuff. The dirt. Like, when was the last time you did laundry?

I’m going through my midlife crisis, but I think it’s a good thing. Most people go out and buy a Porsche or get a Botox injection. I’m obsessed with setting goals. I’ve totally changed what I put in my body and I’m working out. I’ve also set goals for my writing. Keeping to my goals is tough when most days I’m away from my house from 7:00 a.m. to 5:00 p.m. with my job as a teacher and I have two almost teenagers at home. But I’m determined and I know that’s more than half the battle. And yes, this keeps my house a disaster at times.

I want to write stories that people get lost in and fall in love with the characters. I HATE scary stories, except Stranger Things, but I love fantasy and romance. I love to write what I love to read.

Gang, join me in congratulating Heather for a terrific story!

Here’s where you can read more of her work:

And of course, my interview with her after she won the July Word Weaver Writing Contest.