From time to time on the blog we have other authors discuss a topic they’ve encountered. Here, Mike MacDee, friend of the blog and author of Shadow of the Fox, shares a potentially touchy topic that may be frustrating other writers.

Check out his few insights; feel free to discuss, agree, disagree – but be respectful. (You can tell my thoughts from the title.)

This topic has been a source of controversy for a lot of authors, including recently in a Facebook group I frequent with other writers. I wanted to share this to settle the matter for the many authors, myself included, who struggle with accusations of “cultural appropriation”.

It is OKAY to base a work of art or fiction on another culture.

It doesn’t even have to be another country: you don’t have to be Latino to write a Latino character. Just make sure you have a strong research ethic, make your characters people rather than stereotypes, and you’re fine.

I’m white. I have been fascinated by Egyptology and Japanese culture since I was a kid, and always find a way to sneak a little of one or the other into my work somehow.

I busted my ass for years on my first book, Shadow of the Fox, a spy thriller anthology set in Edo Japan.

It is a labor of love and the result of painstaking research, and everyone who has read it has loved it. My first book signing was at Arizona’s Japanese Friendship Garden, called Ro Ho En: the Japanese folks running it were thrilled by the book and extended every courtesy.

They didn’t cry “cultural appropriation,” they were flattered by my interest

and thrilled that I was spreading the love.

I also drew a webcomic called Daddy’s Girl on tapas.io, where the majority of the characters (both good and evil) are black or Latino. One of the three central characters is a black/Latina mix. Another is Japanese-American. There are angry cholitas, Brazilian prizefighters, black physicians and judges, and gangsters of every color.

All the characters are human and give some indication of backstory, wants, and needs.

The comic was featured in a Michigan comic con panel about “ethnic characters in webcomics”, probably because so many webcomic characters are white by default. Pretty sure that means its okay for me not to exclusively populate my stories with white folk. 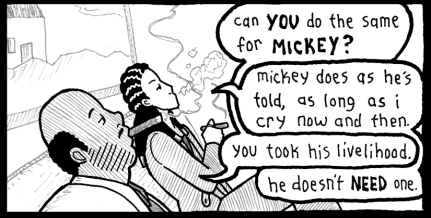 That’s why I lose my shit when I see someone trying to vilify an author for not “sticking to their own turf.”

Those people are the racists, not me.

They always will be no matter what their hugbox tells them.

So I’m posting this for all the authors who have asked if it is okay to write outside of their race or culture:

the answer is YES.

Do not be afraid to diversify your cast

or use a setting outside your own home, especially if you are a white author — if there ever was an easy target, its us. It’s enriching to you as an author, it adds variety to your work, and if you do it without making a bad joke out of it, nobody has the right to vilify you.

Mike MacDee is a subterranean desert creature that secretes graphic novels and short fiction as a defense mechanism. He is currently on the endangered species list, but so far environmentalists have shown no interest in preserving him.

You can read more of his work at mikestoybox.net!

One thought on “The BS That’s Called “Cultural Appropriation””