One of the many privileges of this job is I get to showcase terrific author who have become friends. Today’s another one of those days. Meet Suzanne Rogerson, author of the new novel Visions of Zarua.

Suzanne lives in Middlesex, England, and wrote her first novel at the age of twelve. She discovered the fantasy genre in her late teens and has never looked back.

Giving up work to raise a family gave her the impetus to take her attempts at novel writing beyond the first draft, and she is lucky enough to have a husband who supports her dream – even if he does occasionally hint that she might think about getting a “proper” job one day.

Dan: Welcome! Tell us: who is your target audience, Suzanne?

Suzanne: I don’t know many people who read fantasy, so I’d hoped to write a story that those unfamiliar with the genre would still enjoy, as well as those of us who already love fantasy. Judging by the reviews so far, I’ve definitely achieved my aim.

Awesome! And what about actually writing that first novel? Many authors struggle with that. Did you?

The biggest challenge was getting the structure of the novel right. It’s difficult keeping track of a story that straddles two timelines but I was determined that the reader wouldn’t be confused at any point. Using the first person perspective for those chapters that were in the past and third person for the rest of the novel really helped to make that transition clear. I loved writing Jago’s scenes in first person but it wasn’t a viewpoint I’m used to writing in so that too was a challenge.

Jago? Sounds interesting. What was the inspiration for the characters in Visions Of Zarua?

“The characters come alive for me as I write about them.” – Suzanne Rogerson

Good. Then you’re doing it right. 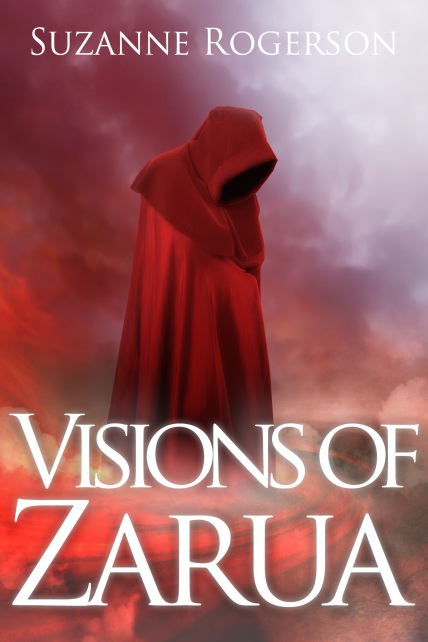 I get to know their story, their history and their characteristics as I write. Then as they develop I can go back and add in the odd detail or slip in a flashback of their past. It may be a long-winded method that requires more editing, but I love editing so that’s not an issue for me. I have tried writing character profiles beforehand, but they are flat and one-dimensional with none of the emotional involvement I get from writing the scenes of the novel.

Man, I hate editing. Maybe you can tell me your secret. Meanwhile, did you draw from real life at all while crafting the story?

I drew a lot from my love of nature and the outdoors. Having a hunt mistress who is more at home in the wilderness allowed me to add in the little details I love about the natural world, and hopefully made Paltria seem more real to my readers.

A hunt mistress? I think I need one of those!

Well, you recently started a blog tour. Tell us where and when you’ll be appearing and how it’s done so far.

The best thing by far about the blog tour was the positive response I received from other bloggers.

I had originally arranged for a company to run a one day book blitz for me, but that fell through. After the initial disappointment I decided to run my own.

I put out the call via my blog and twitter, and within a matter of days had enough yes’s to fill two weeks!

Holy cow! Why didn’t I think of that? I am totally stealing that idea.

I’d only planned to run the tour for a week, so I was overwhelmed with the replies. Trying to come up with original content for two weeks was hard, so I settled on using some of my own photography with small excerpts from the book. I was really pleased with the results.

The blog tour took a lot of work before and during, so if I did another one, I would do it either before or during the release of my next novel as part of my marketing plan. It zaps too much time away from writing otherwise.

Also smart. So? What was your conclusion? Do you recommend blog tours?

Wholeheartedly. I’ve made some new blogging friends and Visions of Zarua has received some great reviews because of it.

Fantastic. Give us places to see where you went and where you’ll be.

Here are the links to all the blogs that were involved in my tour.

Sun 10th July color me in Cyanide and Cherry Review

Give us the blurb and where can my readers get this intriguing book of yours.

Together they must save the realm of Paltria from Zarua’s dark past.

An ancient darkness haunts the realm of Paltria.

Apprentice wizard Paddren is plagued by visions of a city on the brink of annihilation. When his master Kalesh dies in mysterious circumstances, the Royal Order of Wizards refuses to investigate.

Helped by his childhood friend, the skilled tracker Varnia, and her lover Leyoch, Paddren vows to find the killer.

The investigation leads Paddren down a sinister path of assassins, secret sects and creatures conjured by blood magic. But he is guided by a connection with a wizard from centuries ago – a wizard whose history holds the key to the horror at the heart of the abandoned city of Zarua. Can Paddren decipher his visions in time to save the Paltrian people from the dark menace of Zarua’s past?

And of course, we need ways to keep up with YOU

Here are my Social Media links

Okay, and what else can I bother you for? How about a favorite passage from Visions of Zarua?

Paddren bent to examine the ground where Kalesh had made his last stand. He traced his master’s line of sight to the trees. ‘We should check over there.’

Varnia took a step towards the trees, but he grabbed her arm. ‘Wait! Let me check it’s safe.’ Paddren reached out his senses to scan the area and didn’t loosen his grip until he was certain no one was waiting to ambush them.

Varnia and her hound raced ahead. Flint led them straight to the bushes under the trees, to the exact spot where Paddren imagined Kalesh had focused his energy.

‘Come and look at this,’ Varnia called.

As he joined her, Varnia shuffled out the way to reveal the disturbed ground she’d been studying. Paddren stared down at the set of huge footprints. Immediately the outline in the soil began to blur. He shut his eyes, but even behind closed lids, the beast was waiting for him… the beast from his nightmares.

He snapped his eyes open and looked at Varnia, relieved to see her still examining the footprints.

Flint was fighting to get closer, so Varnia let him through. The hound growled as he sniffed the footprints.

Flint sniffed the footprints again and then the area around them. With his nose to the ground, he moved further into the trees, working in widening circles until he returned and sat down next to Varnia, whimpering.

‘That’s strange, he can’t find the scent.’ She followed a similar ritual to the dog, searching for a clue Flint’s powerful nose might’ve missed.

Paddren leant against the nearest tree and surveyed the clearing while he waited for Varnia to accept there were no other footprints.

BRILLIANT! I hope my readers take advantage of your generosity and your helpful blog tour information. (I know I will.) Thanks so much for dropping by!

Suzanne Rogerson loves gardening and has a Hebe (shrub) fetish. She enjoys cooking with ingredients from the garden, and regularly feeds unsuspecting guests vegetable-based cakes.

She collects books, loves going for walks and picnics with the children and sharing with them her love of nature and photography.

Suzanne is interested in history and enjoys wandering around castles. But most of she likes to escape with a great film, or soak in a hot bubble bath with an ice cream and a book.

Give her book a look!