As a writer, you’re going to have moments of self-doubt – sometimes coming from people who are actually trying to help you.

When my wife and I were building our house, there came a time where we had to make a lot of decisions. What kind of cabinet pulls do you want (knobs, but they aren’t all knobs; some are recessed, and if recessed, then a pull), what color pulls, what kind of hinges – hidden or exposed, or this or that. Just to open a fucking cabinet. Multiply that over a whole house and you can quickly go crazy from too many choices.

But before we got that far, we first decided to build a house. So we bought a parcel of land to call our own – and promptly took a vacation to New Orleans. Ah, the Big Easy, a place we love for its great food, and great partying, great architecture, ambiance – you name it. On that trip, we went to Oak Alley plantation, a beautiful “antebellum” mansion with gorgeous columns surrounding the house.

The tree lined driveway was majestic, and coincidentally we had just purchased property with a lot of trees on it.

My wife made a comment about how pretty this house was, and that she’d love to have a house like this.

I thought about it, studying the old structure, and posed a hypothetical question. If I could get you a house that looked like this, would that be what you’d want?

Because before you get to decide the seven or so very important questions pertaining to cabinet pulls, you must also decide the general size and scope of your dwelling to be. One story or two? Sizes of bedrooms, number of bathrooms, types of windows – and we still weren’t even decided on a floorplan yet!

Long story short, an antebellum home is just like any other house, to my eye…

I grew up in Ohio, so there are lots of two-story houses that are boxes. Antebellum homes are just boxes with columns out front. It didn’t look too different from my brother’s house, as far as I was concerned – but I was in the minority.

So I designed the house myself. When my wife looked at the plans, she said “This place looks spectacular.”

And everybody looked at the plans.

The main thing that everybody in the world was going to see when they drove up to this house, the main thing that made this house unique among every other one in our very nice neighborhood, was the columns. You mess that up, you live with it forever.

And everyone thought they were wrong.

They thought I was wrong.

I re-checked my drawings. I went out and I took circumference measurements on columns at the courthouse. I made a scale model paper house using paper towel cores for the columns.

I don’t think there was one person who agreed with me, not even the builder, and I said, “No, I’m right.” I stuck to my guns.

The columns went up.

From that date to this one, everybody – to a person – has said how beautiful our home is. The columns made all the difference. They are not too tall, they’re not too skinny, they’re not too fat; they’re just right.

I stuck to my guns, and I won.

And if I had caved in to any that great advice, I don’t think people would walk up and say how ugly my house is, but it would not be as beautiful as it is.

You know your voice. You know your story. You know your characters. Maybe in your first paragraph you don’t, but very soon after that you do, and it something that’s yours. Take advice from people who have your best interest at heart, but in the end all decisions on your story are yours.

If your book becomes a home run because of their input, there’s more than enough praised to go around.

If it fails, what is the saying? Failure is an orphan. That’s okay. Have the courage to stand by your convictions. In the final analysis, it’s your story. Sink or swim, rise or fall, you make the calls.

If it’s a mistake, you’ll learn from that – as much and maybe more than if it was a success.

And sometimes you learn a lot from a success, too.

You learn to trust yourself. 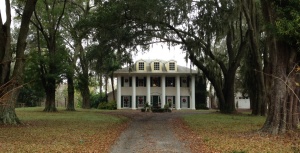 Got a QUESTION? ASK IT! Hit the Contact Me button and I’ll see what I can do. (I have lots of smart friends.)

Dan Alatorre is the author of several bestsellers and the hilarious upcoming novel “Poggibonsi: an italian misadventure.” Check out his other works HERE.

19 thoughts on “Stick To Your Literary Guns”