You should have an “About The Author” section at the end of you book, so fans who want to know a little about you can find out where to go. Some authors have a lot there, some have very little. Look at some authors you like and see what they do. 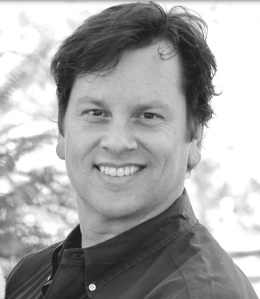 Best-Selling author and humorist Dan Alatorre turned his sights on fatherhood in “Savvy Stories,” and the results are hilarious. Dan was just a normal guy until he became a first-time dad at the age of 47 – when most of his friends were becoming grandparents or sending their kids off to college! Some will argue that Dan was never a normal guy, but nobody will argue that the addition of a bouncing baby girl changed his life. His comedic debut book “Savvy Stories” tells humorous tales about a loving dad who sees the magic in children, and isn’t a bumbling stooge about changing diapers like some TV sitcom. Dan followed up the success of “Savvy Stories” with the even better sequel “The TERRIBLE Two’s,” and his inspirational book “The Long Cutie,” which deals with life affirming stories about people with a rare heart condition.

Dan also writes short stories about parenting and family humor that appeal to everyone. His unique and hilarious short stories include “The Short Years,” “Night of The Colonoscopy,” and “A Quick Trip To Buy Mart.”

Dan’s success is widespread and varied. He became a bestselling author (he claims it was a slow sales week at Amazon when that happened) and has achieved President’s Circle with two different Fortune 500 companies. But he has always been a writer.

“I wrote cartoons as a kid, created a newspaper at my grade school, was co-editor of my high school newspaper… I had a desire to tell unique stories in an amusing way. I’m glad my smart aleck sense of humor has found a productive outlet.”

Currently in the works are “FOURthcoming,” the conclusion to the Savvy Stories series, “Chase Me Until I Catch You,” a nonfiction romance short story, and “The Adventures Of Pinchy Pinchy Crab And Ramon D’Escargot,” a children’s novel, and others.

Dan Alatorre was born in Ohio, and graduated from the University of South Florida in Tampa, Florida (Go BULLS!), before earning an MBA from Tampa College. Dan, Michele and Savvy live in the Tampa area with their dog and cat, and an occasional armadillo (“but we’re working on evicting the armadillo!”)

and “Savvy Stories by Dan Alatorre” on Twitter https://twitter.com/savvystories

One thought on “About The Author – Dan Alatorre”