We were fortunate enough to have several bestselling authors contribute to the scary anthology, in hope of getting some spotlight time for them and our other contributing authors. It all helps, believe me.

One of them stepped up and penned a prologue that, well, I won’t say what it does. See if you can figure it out.

This prologue is available nowhere else until the book releases to the general public on October 1.

PREORDER YOUR COPY of The Box Under The Bed now! Get 20+ stories by more than 20 amazing authors. ONLY preorder customer get the BONUS story, The Water Castle, by Dan Alatorre. It will be removed when the book is released to the general public. Click HERE NOW

YOU are fortunate to read the prologue first, right here. 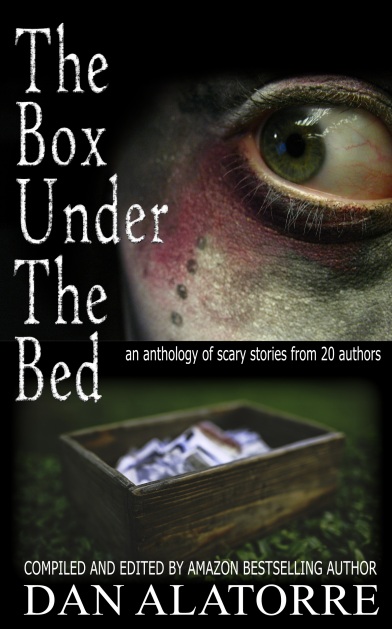 The Box Under The Bed

Tanya crept through the old house, the smell of dust and stale coffee both turning her stomach and igniting her memory. Her sister was around here somewhere.

“I’m down here!” The voice came from the basement.

The door creaked as Tanya eased it open. She made her way down by the light of a single dirty lightbulb, allowing her to barely see the orange shag carpet. “Eileen?”

“Over here.” Her sister popped out from behind a wall, wiping her nose with her gloved hand. Her other hand held a stack of old books. “I thought you’d rather take the bedroom. It’s really gross down here.”

Tanya scrunched her nose. “I’m not sure it will be much better.”

“No, that’s all right. Call when you’re ready for a break.”

Tanya climbed the stairs to the second story, entering what was her grandpa’s bedroom. As the only local family left, it was up to her and Eileen to clear the house and prepare to sell it. Her grandparents had lived here for fifty years, and while the job was a sad one, Tanya couldn’t help but wonder what treasures she would discover.

She crouched next to the bed and peered under it—plastic boxes filled every inch of floor space. “This is as good a place to start as any.” After pulling five boxes out, she opened them and examined the contents: sweaters in one, old papers in another. One was full of ribbon. Tanya laughed to herself. Grandma always stocked up during a sale.

Tanya repeated the process after every five boxes, finding nothing more interesting than some tarnished jewelry. When she finished, she peered under the bed again, now cleared of the boxes.

Or almost cleared. There was something tucked against the wall, by the headboard on Grandpa’s side. It was so dark she almost missed it.

Straining, she reached for it, brushing the edge with her fingertips. But she couldn’t get a grip on it. “Ugh.” She stood and moved the end table aside, allowing her to crouch amid the dust bunnies and get a better angle.

Her fingers found the edge of the box—it was wooden and didn’t have a lid. She slid it out, releasing years of dust from its resting place. Fighting a tickle in her throat, she coughed.

“What is this stuff?” She picked up the first few items, brushing the surface dirt from them and resting them on the carpet: a toy train, an empty champagne bottle, a glass cat, and a brass compass. Some of the items made less sense than others. Why would Grandpa keep an Aspirin bottle, a scalpel, a bottle of fish oil, and a comb? He could replace those anytime.

While Tanya considered moving on and emptying the closet, the randomness of the items in the box kept her attention. When she reached a knife and boxcutter next to a white teddy bear and a pack of cigarettes with French writing on it, she shook her head. Grandpa must have had his reasons for keeping these. But what on Earth could they be?

10 thoughts on “Second Big Announcement: The Box Under The Bed PROLOGUE – available nowhere else!”